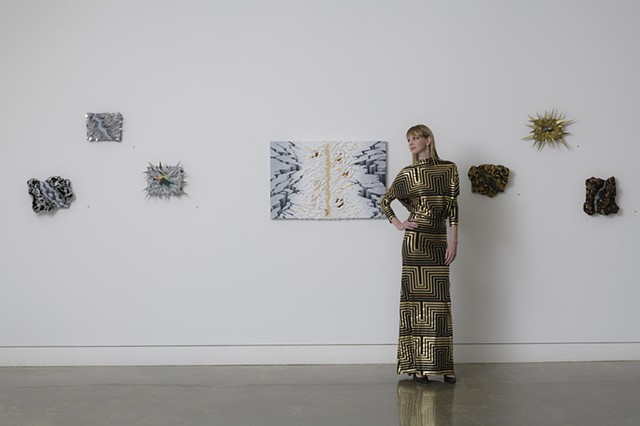 Los Angeles-based artist Kelly Berg’s paintings explore natural phenomena and landscape through mixed media layering techniques, expressing a world that is simultaneously futuristic and primordial. Berg’s work captures the movement of tectonic plates and the growth of geological formations, and serve as metaphors for time and the ever-changing nature and impermanence of our world. She has developed her own unique language of mark-making, building up elaborate textured surfaces suggestive of topography and rock formations that occupy the space between painting and sculpture. Berg’s textural works become jewel-like objects that radiate and have a transformative quality, changing in various lighting situations and reflecting the viewer in shards and spikes of plexi glass mirror. The realism in her paintings serve as windows into other worlds where beauty and perceived danger exist simultaneously, expressing a contemporary approach to the sublime and enticing the viewer to explore the mysterious and often cataclysmic landscapes. Berg’s paintings ride the edge between fear and attraction, and the danger and serenity of the natural world.

Berg’s personal experiences during her travels to both geological and archeological sites directly inform her studio practice and paint layering techniques. Berg’s lifelong interest in archeological sites was ignited in 2008 after her first visit to Italy, Greece, and then Egypt, which she describes as her “journey through time” seeing evidence of older and older civilizations in chronological order and also places where geology and archeology intersect. Berg states “Painting, layering, and then scratching away revealing the layers beneath is my way of processing this information about the world that I uncover, subconsciously becoming an excavation of my own psyche.” An ongoing series of Berg’s paintings feature smooth sided pyramids that she uses as a powerful symbol representing geological energy and current global phenomena, while referencing ancient civilizations and the Giza pyramid complex. Berg states in regard to her most recent pyramid “rift” paintings, “The pyramids rising up through the cracking earth signal something new and powerful is emerging from darkness and destruction. Ultimately from these dark and foreboding crevasses and cracks, something new and optimistic can be born.”

During the last decade of Berg’s studio practice, the earth has seen dramatic geological events such as earthquakes and volcanic eruptions, including the 2018 eruption of Kilauea that emerged along a rift zone and simultaneously destroyed land and created new land. Also more visibly in recent years have been the effects of global warming, evident in cracked earth from drought and fire and melting glaciers. These events, in addition to earthquakes in California, have been Berg’s inspiration for creating her “Rift Series” which feature iconic renderings of jagged cracks in the earth. The paintings symbolize not only the earth being shifted and formed by geological processes, but are also reflective of divisions and shifts we have been experiencing in society in recent years. In 2012 Berg first visited the Kilauea volcano in Hawai’i Volcanoes National Park on the Big Island of Hawaii, which also had a profound effect on her work. Berg became intensely focused on volcanic imagery and other natural phenomena, such as lightning she witnessed during severe thunderstorms during her childhood in Minnesota. Since that first visit, Berg has made multiple trips back to Kilauea to experience the ongoing changes in the volcanic activity first hand. More recently she hiked to the caldera summit of Mount Vesuvius near Naples, Italy which has also been a source of her volcanic inspirations. Berg is dedicated to experiencing the landscapes in person that she portrays in her work as research for her studio practice, following in the tradition of the mid 19th century Hudson River School and the Volcano School of painters in Hawaii while bringing her own contemporary viewpoint.

Kelly Berg has been living and working in Los Angeles since 2009, where she currently maintains a studio. Berg was born in Concord, Massachusetts in 1986 and soon moved with her family just outside of Minneapolis, Minnesota where she was raised. She began drawing and painting at an early age, having an early deep found interest in nature and art that was nourished by frequent trips to the National Parks with her family and visits to the local art museums including the Walker Art Center and the Minneapolis Institute of Art. She received her Bachelor of Fine Arts Degree from the Rhode Island School of Design in 2008, where she focused on drawing, painting, and mixed media within the Illustration Department. Berg’s work has been featured in exhibitions at local, national and international venues including Craig Krull Gallery (Santa Monica, CA), Melissa Morgan Fine Art (Palm Desert, CA), The Frederick R. Weisman Museum of Art at Pepperdine University (Malibu, CA), The Lancaster Museum of Art and History (Lancaster, CA), The Manhattan Beach Art Center (Manhattan Beach, CA), The Pete and Susan Barrett Gallery at Santa Monica College (Santa Monica, CA), The Carnegie Art Museum (Oxnard, CA), Mana Contemporary (Miami, FL), Mana Contemporary (Jersey City, NJ),The Marjorie Barrick Museum of Art at University of Nevada (Las Vegas, NV), and the Art 1307 Cultural Institution at the Villa di Donato (Naples, Italy).

In 2011 Berg was an artist-in-residence at the Roosevelt Hotel in Hollywood, CA, working in a storefront window along the Hollywood Blvd Walk of Fame. In April of 2019, Berg completed an artist residency at Art 1307 Cultural Institution in Naples, Italy and created a painting inspired by Mount Vesuvius Volcano which was in view from the studio. This work was included as a part of the exhibition “Affari di Famiglia” at the Villa di Donato in Naples along with several additional works by Berg, her husband artist Andy Moses, and father-in-law artist Ed Moses. In 2017 Berg taught a mixed media painting workshop as a guest artist for the Teen Summer Art Experience at the Donkey Mill Art Center in Holualoa, Hawaii. During this time and the following summer in 2018, she created a series of Monotype prints at the Donkey Mill Art Center inspired by her stay on the island.